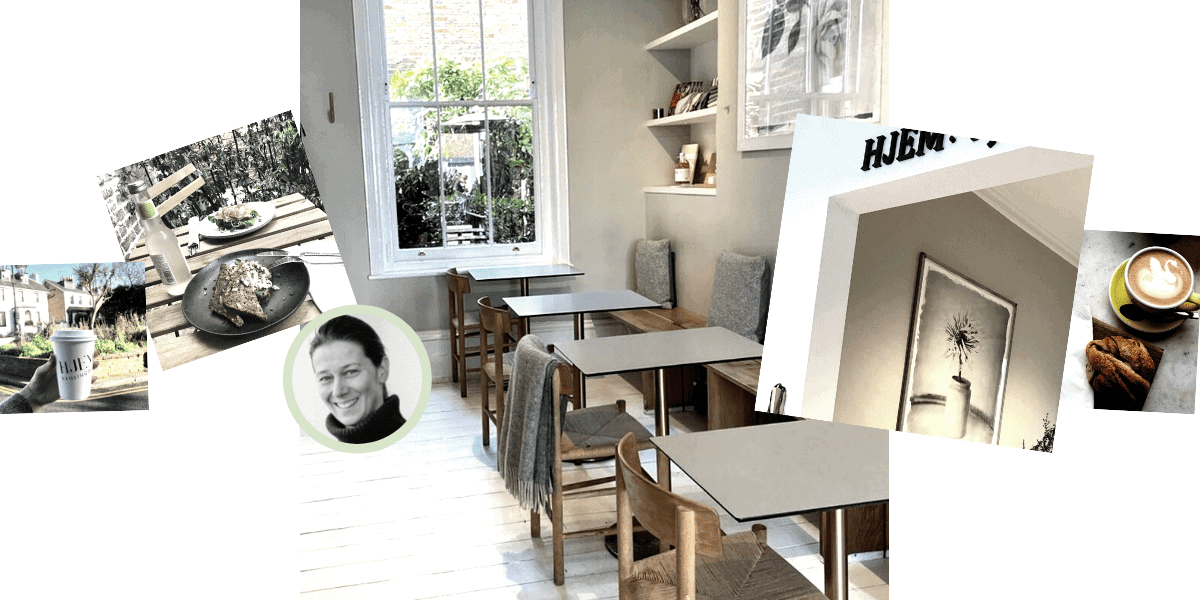 Hjem – Traditional Danish Cafe in the Heart of Kensington

“One of the things people seem to like about this place is that they can sit here and chat to us,” says the founder of one of Kensington’s best kept secrets, Hjem, a pretty coffee shop in London’s royal borough. Indeed so, the young couple at the table next to ours overheard our conversation and soon the questions came thick and fast. This is how Hjem – traditional Danish cafe became a focal point for the young and old and poeple from different countries.

“You should open another cafe. Why don’t you have wi-fi? I come here regularly for my cardamon bun,” they say amongst many other things. Danish-born Marianne Brammer, who started Hjem four years ago, smiles and takes everything on board. She had been thinking about all those things for a very long time.

From 52 Irving Place in New York to Kensington

It’s nearly 30 years since she first dreamed of opening her own cafe, a journey that’s taken her from one continent to another and from one cafe to another, 52 Irving Place, Gramercy Park in New York, being one of her favourites.

“It was 26 years of dreaming about it and four years of actually doing it,” says Marianne. “When I was in high school in Denmark my friends and I used to hang out at cafe Europa in Copenhagen’s Amagertorv and we’d say to each other ‘when are we going to start a cafe?’ It was a girl dream.”

As we speak, her dream has come true with people queuing outside cafe Hjem, the Danish word for Home, in a former florist’s boutique in one of London’s exclusive residential areas. It oozes charm and organisation, well versed in how to serve a commuity used to the best money can buy.

But although Marianne comes from a business background and a career in investment banking in New York and Johannesburg, Hjem isn’t about the money. The recent doubling in price of raw materials has not been passed on to consumers. Hjem, she says, is about other things. 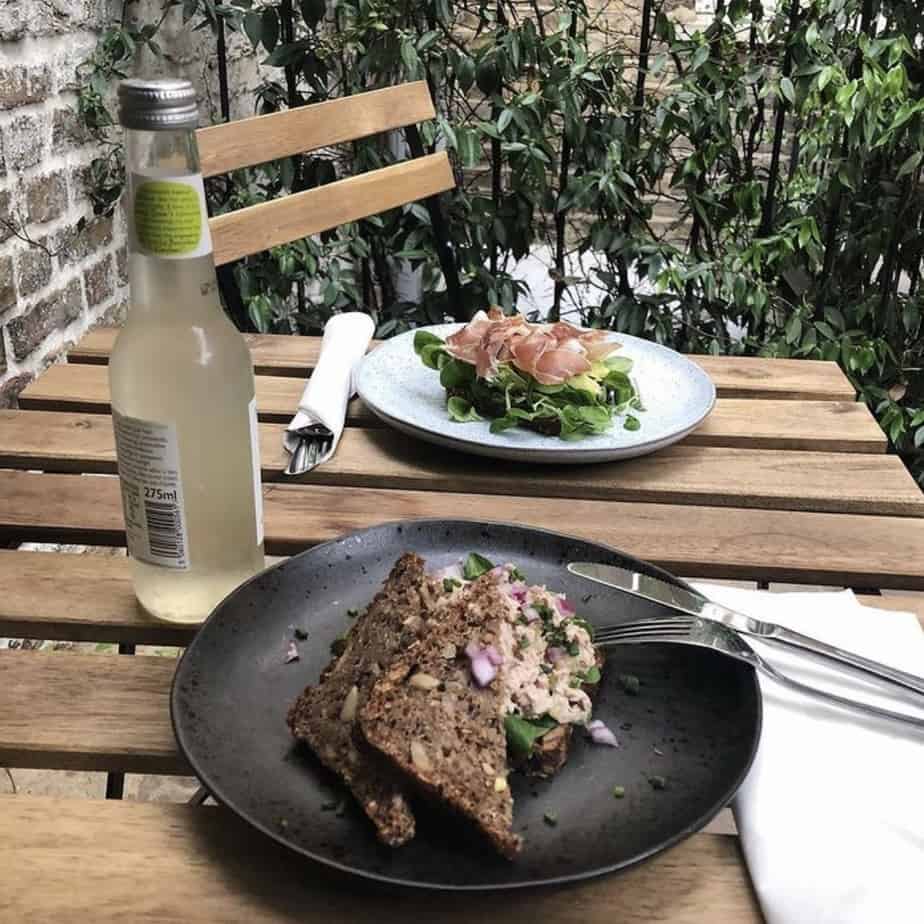 Recipe for success: Home made and organic

Marianne is very much focused on other things. “The colour on the walls is the same sort of green as on the public benches in Copenhagen,” she says, turning to the decor. “Apart from that the interior is casual Scandi, no particular design strategy except I wanted to make it feel like home. And cosy.”

Cosy – or Hygge – has been the buzz word for the last couple of years, but Marianne mentions it only once casually. The most important thing about Hjem, to her, is the food, tea and coffee. “We make speciality coffee, what people want. The tea is Cocoon Tea Artisans, a Danish company, our milk is delivered every day from a farm in Kent and our hand-churned butter comes from another farm.”

Every ingredient is carefully sourced or ideally homemade. Most of their offering is organic and in the tradition of Marianne’s own mother back in Denmark, just north of Copenhagen.

“My mother made everything herself, jam etc. She never took us to a fast food place so it’s not something I’ve grown up with. And ever since then I’ve made my own ryebread whereever in the world I was.”

Marianne has also been making ryebread for Hjem throughout lockdown as well as the in-demand cardamom bun which now has its own Instagram hashtag #hjemcardamombun. Ketchup, even, is made on the premises by staff.

As for exactly how things are made, that remains a well-kept secret. “The recipees are my own,” says Marianne. “I developed our cardamom bun recipe during lockdown and and it’s so satisfying to hear someone like the lady next o us saying she comes in regularly for her cardamom bun. It’s proved to be very popular.”

“We don’t even have a website! I know, it’s appalling”

Just as recipees are not shared with chatty customers, neither are people likely to get a wi-fi connection inside the coffee shop any time soon. It’s a relatively small space with five tables for two by the counter, another couple of tables in an adjacent room and five tables in the small garden.

“People can still log on to their own internet provider, but we don’t want to encourage people to sit here with their laptops,” adds Marianne. “It would affect the vibe, and other people would get frustrated when they came here and couldn’t get a table. The place is too small. We want the place to feel like home, not like an office.”

Indeed, the cafe has a homely feel from another time long before computers and Zoom meetings. You can hear people talking to eachother. There’s more noise here than in some other coffee places where people are lined up in front of their screens and wearing headphones.

It’s almost as if Hjem hasn’t quite entered the 21st century yet. It didn’t have a website until recently. “I know, it’s appalling!” says Marianne not without laughing. “We just have a place-holder. But what is a website going to do for us? It isn’t going to help me make a better bun.”

Marianne explains the seeming lack of a plan. “Before Hjem I’d only ever worked in an office, never in a cafe or in the service industry. But I took a few courses and read books on how to start a coffee shop and quickly realised the ryebread cafe I wanted to open probably wasn’t going to work. It had to be about coffee.

Hjem does have an Instagram account, though, for communicating with customers, even if advertising is not part of her marketing plan. Except for one poster oddly glued on to the boarding at a building site in Kensington High Street, Marianne has never paid for promotion.

“The Council, who have actually been very supportive and pro small business during lockdown, contacted me and asked if I’d like to pay to have a poster made and they’d put it up for me. So I paid £142 and up it went on a board by the old Odeon cinema which is being re-developed. But I don’t know if it’s actually brought in any customers.” 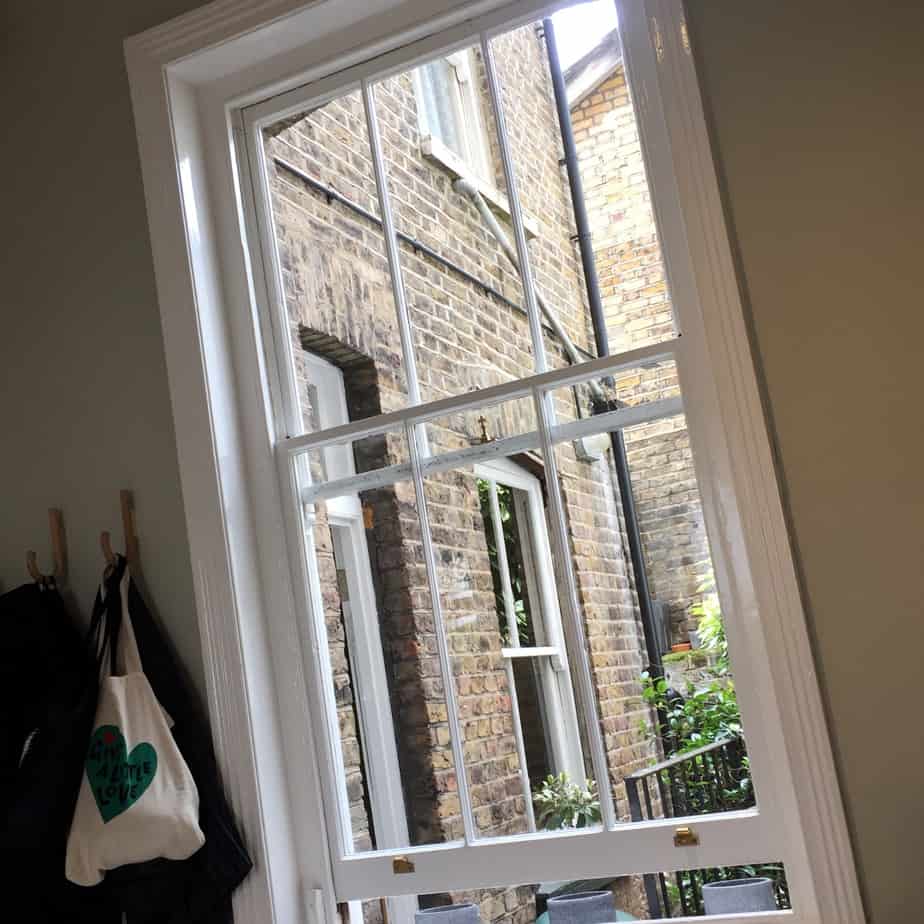 So who are the customers? Hjem is at the heart of an affluent but understated client base, tucked away amonst private homes, some of them costing several million pounds each. They are beautiful, white glazed houses with window boxes of pink flowers. The famous Kynance Place, popular amongst Instagrammers, is a stone’s throw away and from the cafe window Marianne can see her children’s school. She and her husband live only a couple of minutes from there.

Local residents have included Princess Margaret’s husband, the late Lord Snowdon and TV’s Missing Link presenter Anne Diamond. Looking at customers in the coffee shop today, they are young couples and students, yummi mummies and professionals working in surrounding shops. “They really are all age groups and a mix of people travelling in for work, computer programmers and local elderly people.”

Kensinton Flowers store is just round the corner opposite Launceston Place restaurant, which was once run by a friend of the late Diana, Princess of Wales. Hjem is very much old school England meets old style Scandinavia.

The decor is what caught our eye first and foremost: a solid counter that looks slightly pre-peacetime as you walk through the front door and tidy, beautifully painted walls in soft moss green sparcely decorated with prints. The prints come from a photo company next door. The shelves are quietly decorated with accessories, some for sale like her own Hjem cups, bags of coffee, tea towels and a couple of unfussy floral decorations. The interior is calming and light in earthy colours: greens and various shades of brown.

Hjem – traditional Danish cafe in the heart of Kensington doesn’t look like a London cafe or anything we’ve seen in a magazine recently. Yet, to those of us who grew up in Scandinavia, there’s something very familiar about the place: it reminds us of home.